I did this painting in honor of my mother who recently passed on 21 Mar 2020, and for my wife’s mom who passed ten years earlier on 4 May 2010. My wife and I loved our mom’s dearly. I wanted to create something special for them. Oddly enough I finished the painting on Easter Sunday. As I was painting it (and I’m not making this up), I was listening to my favorite Rock station. I love old 70’s Rock music when a song started playing. You guessed it…. Led Zeppelin’s “Stairway To Heaven” played. It was an emotional painting for me, but at the same time it was comforting knowing that both our mothers walked the Stairway To Heaven. I used 3 pine board planks glued together for my canvas.

This is my 9th painting of Penelope and Louis continuing their globe trotting adventures. Here they are in the Falkland Islands at sunrise with a February Snow Moon. The Falkland Islands are considered as being the Penguin capital of the world. 5 species of Penguins live on these islands in the South Atlantic. I painted this on 3 small wood pine planks.

This is my 4th painting of a Hawk. My previous efforts were Puddle Hawk, Harris Hawk and Moon Hawk which all can be seen here on my blog. I think one time or another we all have seen or wanted to see shapes in the clouds. So, I brought a Hawk to cloud life with this painting. It’s painted on two pine planks glued together.

One of my Nieces (Michelle), told me she likes elephants. So, I decided to paint one for her. These are indeed incredible animals. I basically only used three colors. Black, White and Antique Gold (for the sun on the elephant and African prairie grass. This painting is on two small pine planks glued together.

I did this painting for my wife’s sister Adri. My wife and Adri are from Holland, so it wasn’t hard for me to come up with something to paint for her. The Dutch windmill is iconic. Most people immediately know that this kind of windmill scene represents Holland. Early on in my blog I did a windmill painting for my wife. I made one on two pine planks glued together.

A challenge and a victory. Hiking the Knife Edge Trail to Chimney Peak on Mount Katahdin Maine. Like the game of Chess it takes strategic moves. I did this painting for my oldest son. I combined his love of Chess and hiking into one little painting. It is a reminder and tribute to him for tackling the Appalacian Trail back in the year 2000. This is small wood canvas measuring only 5″ X 7″. 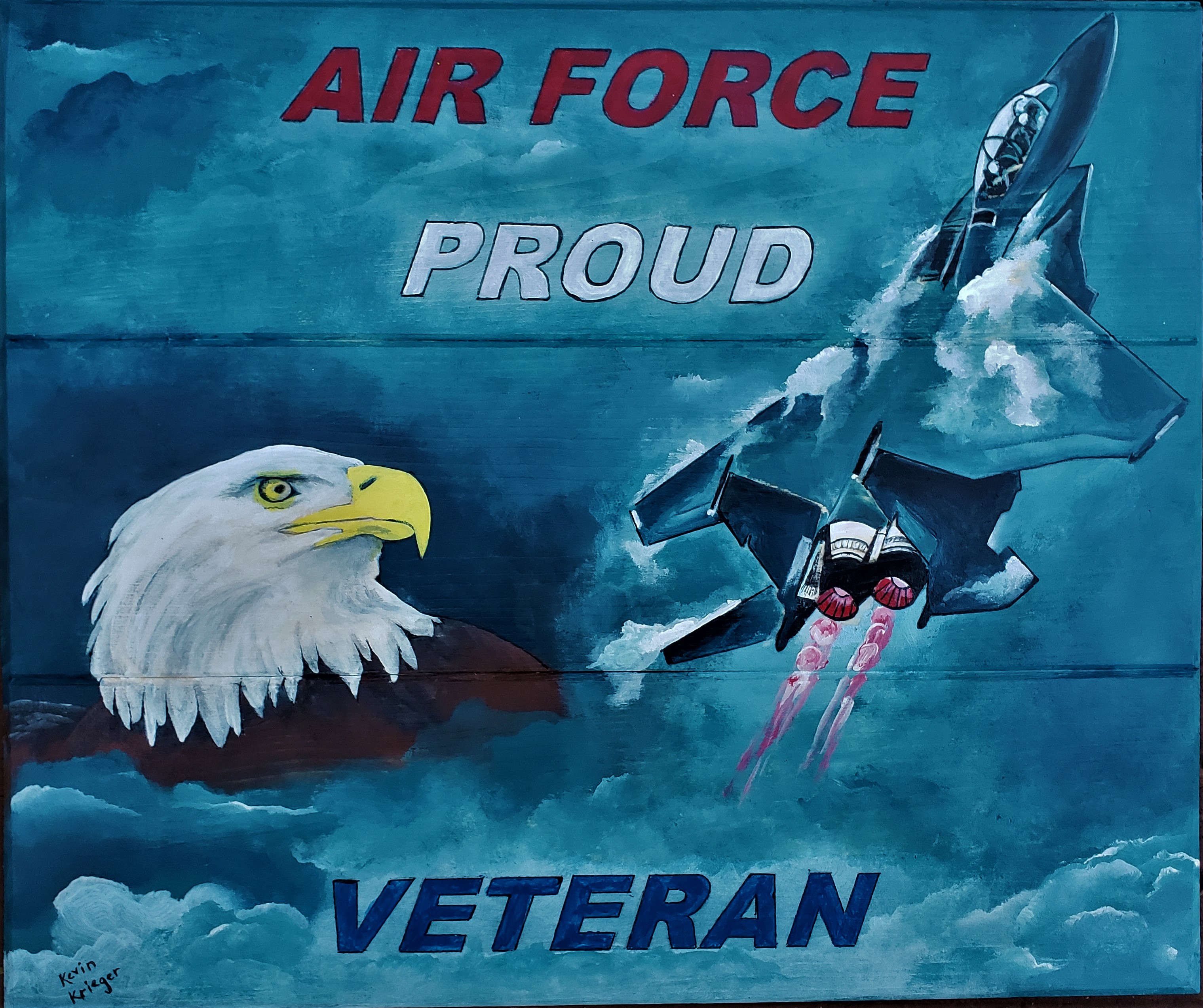 My brother-In-Law (Brother), Ray asked me to do a painting for him. I asked him what kind? He said something military. Since we were stationed together on the same base in Europe 40 years ago this would be something I could do that we both would feel good about. The first fighter I ever worked on was the F-4 Phantom, so I almost went with that for my center piece of the painting. But, my favorite fighter was the F-15 Eagle which I also worked on after the F-4. I decided to go with the F-15. Of course, since it’s called the Eagle I decided to also include it’s depiction. Since we both were in the Air Force and are Veterans I also decided to word it in the painting with a Red, White and Blue theme. For anyone who knows the F-15 it was known for it’s full after burner max climbs, as it corkscrewed through the clouds. It’s engines capable of producing 50,000 pounds of thrust easily propelled this fighter jet with sheer brute force. I never tired of watching it over the years I worked on it. Loud and proud…it was and still is an excellent bird! Thank you Ray for your service. Go Air Force! I made this painting on three pine planks glued together. 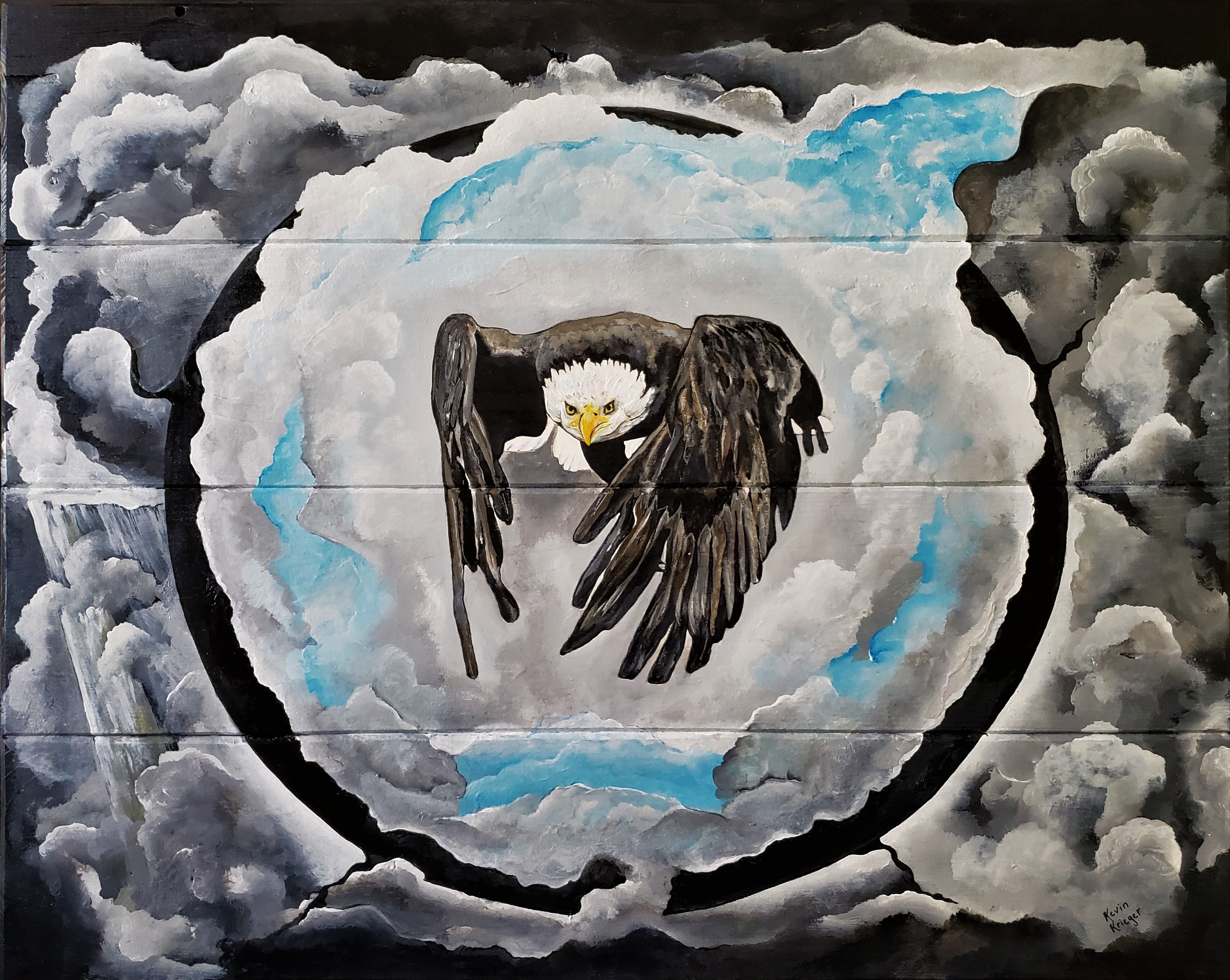 The determined fierce conqueror eagle is unafraid as he commands the dark skies. He thrusts his strong wings through a perilous epic journey. His quest is towards calmer blue clouds. He will succeed and not be defeated by the turbulent storm winds that engulfs him. He will win out and soon be able to soar free on more peaceful heavens. I almost didn’t complete this painting. It wasn’t coming out the way I wanted it to. Through the middle of it, I completely changed directions by making it a more mystical piece. I made it on four pine planks glued together. 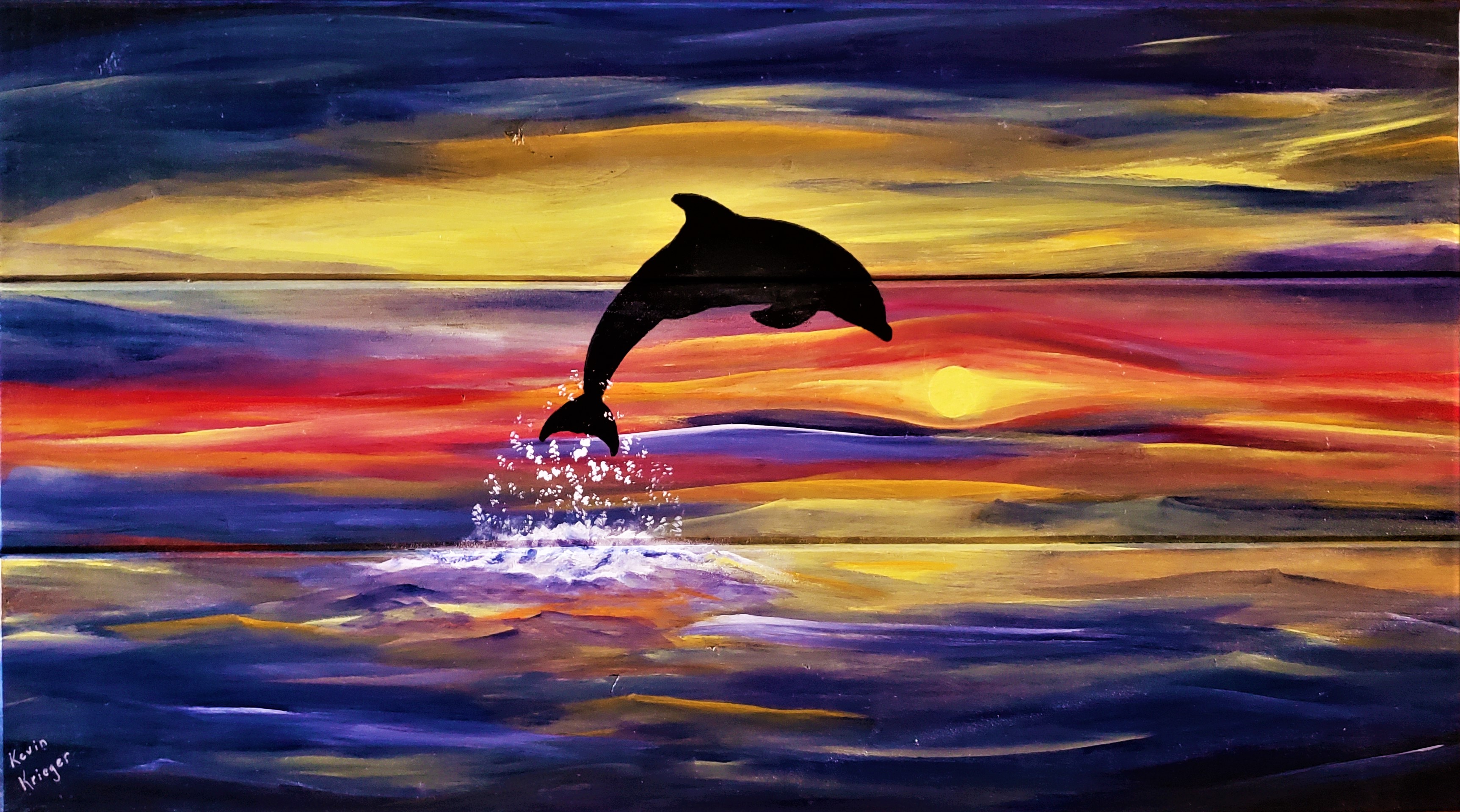 The graceful dolphin’s arched leap over the sun catches the fading light that will soon turn into night. My wife likes owls and hummingbirds. She also likes dolphins and whales. This painting is for her. I did this painting in one day on three pine board planks glued together.

My wife and I just floated the Current River, and I felt inspired to do another painting of it. It was a great float! I decided to go with a bright pink and orange sky, and a huge morning sun. The river winds around the bluff on the left, and is complimented with a large gravel bar on the right. Great place to pull up the canoe and have a morning dip. The Ozark Mountains up ahead. The morning air is cool with spring fed water that’s crystal clear. We go with the flow. Made this painting with two small pine wood planks.